The project was funded by Caltrans through a Fiscal Year 2010/11 Community Based Transportation Planning grant of $90,000 with a $10,000 local match from MCOG. The plan's focus was on Hopland, Ukiah and Willits, with potential interregional connections, along the North Coast Railroad Authority (NCRA) railway. The professional team of Alta Planning + Design with its subcontractors GHD (formerly Winzler & Kelly) and Redwood Community Action Agency's Natural Resources Services division was selected to work with local stakeholders and develop the plan.

The team researched existing conditions and requirements, compiled public input through workshops and surveys, and worked with a Technical Advisory Group.

Public workshops were held during September 2011 in Willits and Ukiah. A third workshop was held to review the draft plan in March 2012. The final plan was presented and adopted by MCOG at its regular public meeting on June 4, 2012.

Goals and Vision for the Corridor:

Priority projects established in the plan:

Actions/accomplishments to date by City of Ukiah:

Actions/accomplishments to date by City of Willits: 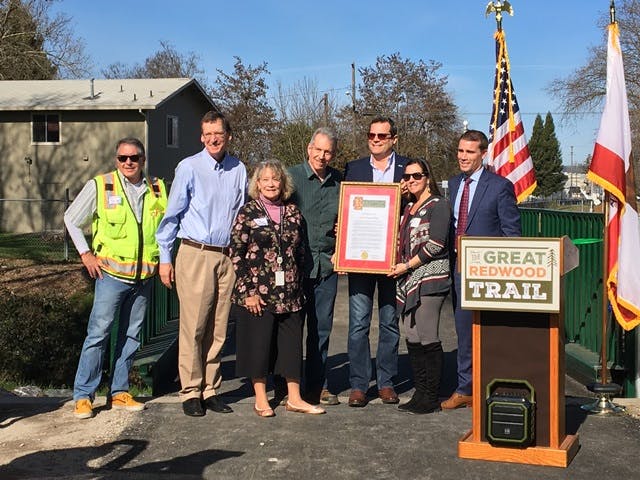 January 31, 2020 - The newest segment of Ukiah's rail trail was opened with a ribbon cutting ceremony at Clara and Mason Streets. A crowd assembled, with State Senator McGuire, elected officials, city staff and other key players giving remarks and thanks to all who helped to make it a reality. MCOG's entire staff joined in the festivities. Congratulations to all involved with completing this…

Sign up for updates from Mendocino Council of Governments